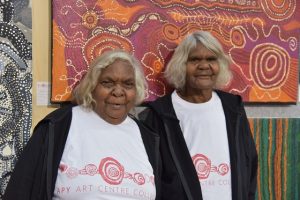 Artists from Art Centres right around rural and remote Australia have travelled to Adelaide to present their art works to Adelaide buyers and collectors at the TARNANTHI Art Fair.

The event is being held at Tandanya National Aboriginal Cultural Institute this weekend.

Cara Kirkwood, a Mandandanji, Bidjara and Mithaka woman from Queensland who is managing the event for TARNANTHI, says that Art Fairs are a showcase of the diversity of Aboriginal visual culture.

“This gives you an opportunity to access work that has come from the Torres Strait Islands, the Kimberleys, Western Desert, Far North Queensland, Tasmania. We’ve got artists represented from right across the country” she says

As well as an astounding showcase of Indigenous creativity, the event provides an opportunity for people to meet artists personally and be sure that they are purchasing ethically.

“It’s the best way for people who are unaware of how to ethically purchase Aboriginal art, to make sure it’s ‘right way’” Cara Kirkwood says.

“At an art fair you will get a certificate of authenticity, a statement about the work and a little bit of information about what the work actually is” she explains.

One of the central challenges of a major national event is getting artworks and people to the venue, Cara Kirkwood explains.

“For example, if you’re from Torres Strait Islands, you’ve got to get your art work wrapped, freighted, which means it’s got to be boated across from an Island to a mainland point to then get on a truck, to then transit all the way down, possibly on a train, there’s so many means that get artworks here, let alone the artists themselves” Cara Kirkwood says.

That sharing of culture is central to the TARNANTHI Art Fair.

“This is what the art fairs are all about actually, looking at culture in a visual sense” Cara Kirkwood says.

Tjungkaya Tapaya and Nyurapaya Kaika  are the Directors of the APY Art Centre Collective (pictured top).  They have brought a huge collection of art from communities in the APY Lands, including Tjungkaya Tapaya’s work Seven Sisters.

She explains the story behind her work King Brown.The King Brown is her totem and an old story from her family, where the blue tongue lizards fought the King Brown for his home.

Lindsay Malay is from the Warmun Art Centre in the Kimberleys. Kimberley Aboriginal artists from different Art Centres have worked together to bring their works to Adelaide. Lindsay’s works tell stories of the travels of his ancestors, and of his children across his country.

The TARNANTHI Festival and the Art Fair are labelled “contemporary”, however Cara Kirkwood believes its important to see Aboriginal art in a continuum.

“People often like to use the word Traditional within Aboriginal art, but you know this is just a continuum, there hasn’t been a stopping point.

“People have been making art and making ceremony and engaging in culture in a continuous manner for 40, 60 thousand years” she said.

At the TARNANTHI Art Fair you can see those practices continue and thrive.