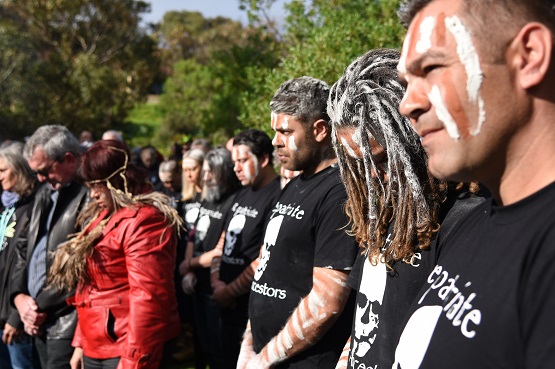 Working Together To Bring Them Home

After years of uncertainty and loss, the Kaurna community were able to lay some of their old people to rest on their traditional lands in an emotional ceremony in late July.

Kaurna leaders went to Canberra to collect around 800 ancestral remains, some of which had been stored in London’s Natural History Museum and brought them home to be buried.Kaurna Elder Jefferey Newchurch has been the driving force behind the repatriation of Aboriginal remains.“I have been entrusted by my elders, years ago, and my community, to push this conversation, and to make sure it happens. We are starting to get a better relationship with the SA museum and the State Government, and we are now pushing for more to be returned. For me it’s about allowing us to heal and for us do our business our way.Mr Newchurch said the support of the wider community is important.“We can’t as Aboriginal people heal alone. We need the wider community and this is not only government this all community people. Because, they add strength”, he said.Support was shown at the reburial at Kingston Park last month where around 400 people and media attended the emotional ceremony.Kaurna man Allan Sumner, spoke at the ceremony about the importance of understanding history.“When we think about the devastation of our culture here, particularly in the southern states; our loss of language, our systems, our family systems, our groups. Things got mixed up. But, as we come together, we understand those histories. We need to understand those histories to move on. So I encourage you today, young people here today, learn your histories. Because, without those histories, we can’t move on. If we learn those histories, that informs us to make better decisions about how and where we stand in this country”, he said.Mr Newchurch told Aboriginal Way that educating the next generation is crucial for success.“Most importantly for me, is for our young people to be educated. Because we are locked in the past and not only Aboriginal people, non-Aboriginal people need to be educated. We need to empower young people so that they can take on more and build a better future”, he said.The Premier, Steven Marshall MP did not attend the ceremony but in a statement said the work of the Kaurna community should not go unnoticed.“The significance, and importance, of this occasion and what this reburial means for your community, cannot be overstated. However, I also acknowledge the emotional and spiritual distress that the taking of old people from country has caused. I extend my sympathies to you all. This repatriation ceremony, as with the Tennyson repatriation in August 2018, marks a turning point for the Kaurna community and Aboriginal South Australians more broadly. The Kaurna community’s ongoing efforts to repatriate ancestral remains continues to forge a path for, and inspire, other Aboriginal communities in South Australia to do the same”, said the Premier.