Home» Why A First Nations Voice? 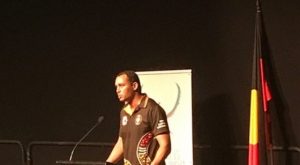 A First Nations Voice to Federal Parliament is a simple and achievable change to the Constitution that will give Indigenous people the practical recognition they are asking for, according to one Indigenous leader.

Thomas Mayor is co-chair of the Uluru Working Group, the group established after the Regional Dialogues and Uluru Convention which first put forward the idea of a First Nations Voice.

He says that the fact that the Referendum Council only proposed one change to the Constitution after years of debate over the issue is positive.

“It’s positive because it keeps it focussed on a very simple thing that Australians can consider. Surely if anybody is asked if we should have a voice on our own affairs, I think the answer will be yes,” he said.

Mr Mayor says that the First Nations Voice to Parliament would be important in giving Indigenous Australians much needed influence over decisions that affect them.

“It gives us a constitutionally enshrined voice that cannot easily be removed, it holds some weight being referred to in the Constitution and it also gives us a voice at the highest level on what should be considered in the making of legislation about us. That gives us an opportunity to be at the front end of decision making, rather than be reactive,” he said.

“Status quo is not enough. The status quo is killing us. And so if this opportunity isn’t embraced and we don’t take a step forward, we’re not doing our next generations any favours at all,” he said.

A statement of recognition in the Constitution was long expected to be an outcome of the reform debate, however the Uluru Convention did not support that concept, and now the Referendum Council has not made that recommendation to Government.

“There was a very strong voice from all of the dialogues that recognition alone, something that couldn’t give us a greater voice in our own affairs, was not something that we wanted to change and to have in the Constitution,” said Mr Mayor.

Mr Mayor says that the First Nations Voice to Federal Parliament represents a practical and important form of recognition.

“A Voice to parliament is a form of recognition in itself. It may not be poetic words and all that sort of stuff, but our people have said we want practical reform, a reform that adds power to our voice to affect the decisions made about us.

“So I would say to people – this is still a form of recognition. This is the recognition that our people have said that they want, because it adds to our ability to change our lives,” Mr Mayor said.

The Uluru Statement from the Heart had two other key components — the establishment of a Makarrata Commission and the pursuit of treaties through that body. Those changes do not require Constitutional change and will be strengthened by the First Nations Voice, says Mr Mayor.

“Well the Uluru Statement strongly called for Makarrata and that’s what the working group will continue to push for. Truth and treaty was a big part of the convention statement and there is going to be a continued advocacy for that.

“Treaty was the strongest call in the convention and the Voice puts us in a stronger position to achieve those things and to protect those things and also to ensure that truth telling is a part of this country’s reconciliation,” Mr Mayor said.